World of Freedom 3.2 - Whatever Comes To Mind

Where in all of your character write ups will go.
Post Reply
1036 posts

And with the same problem, that the pupils of the maestro rarely equal them. His overall image was inspired by an ersatz-Picasso I saw in (I think) an SCTV spot, ages ago.
Top

Looooong time lurker! I love your ever growing take on the Freedom-verse. I was wondering if you have anything to say about the Terminus and it's inhabitants? Omega and his legions of annihilators are vast. Instant Superheroes 2e fills in nicely for Omega's minions. I got Jab's Dr. Wily and his robots, Kreuzritter's Freedom force, and the Imperfects from that awful videogame as refugees from universes destroyed by Omega.
Marvel Vs. the Terminus! What I think the recent Secret Wars should have been.The Avengers, Fantastic Four, X-men, and the rest of the Marvel universe teams up with the remnants of previously shattered universes. Freedom Leauge, The Heroes from Crooks(good book), The Bat- family (DC got destroyed. They woke up in Chicago intergrated into the 616 as if they were always there), and the original archetypes from MM2 step into the fray to lend a hand.
Thanks for the builds!
Top

Doc chaos wrote: ↑
Thu Nov 09, 2017 9:01 pm
Looooong time lurker! I love your ever growing take on the Freedom-verse. I was wondering if you have anything to say about the Terminus and it's inhabitants?

Not yet, but I agree that Instant Superheroes and its 4E counterpart, the GM's Kit, are tailor made to create new Annihilists. Now that I think about it, though, there is one member of their roster that I might depict later on, and some others are germinating in my mind as well.
Top

Don't you have a character named Oath breaker? From a Young Avengers homage.
Top

Born just a handful of decades after her cousin Kal-Zed, Kar-Zol was a far more typical example of her people. While the idea of striding the world like a god did appeal to her, as it obsessed him, it was more based on a desire to experience the outside world than a need to be worshipped. After the arrival of the German expedition to Ultima Thule, she even lost that desire -- from what they revealed, the outside world seemed to be a horrid place! She was glad when they were sent away, but then Kal-Zed disappeared as though he'd followed them.

For more than a decade, Kar-Zol fretted over this, wondering what had happened to him. (Her elders elected not to tell her about Kal-Zed's misdeeds as Ubermensch. At her mother's request, she was even spared seeing the mental movie of his activities in Poland.) She didn't want to go out into the world -- horrid place! -- but at the same time she did want to know what had happened to her cousin. (She had a bit of a crush on him, you see.) Finally, in 1959, she secretly ventured out of Ultima Thule ... and promptly got lost in a terrible blizzard. She was found and rescued by the Centurion, and proved the agent of introduction between him and the Ultima. Soon after, she would help him in a battle against his foe Superior ... and discovered, to her sorrow, what had happened to Kal-Zed.

Over the next few decades, Kar-Zol would go out into the world quite a few times, having adventures with Centurion and other superheroes. She variously called herself Centuria and Vesta, and among those who were unaware of the Ultima's existence, she would sometimes claim to be Centurion's cousin or little sister. All the while, she nursed a deep crush on her rescuer, and while she sometimes showed romantic interest in other heroes -- such as the young Jack Wolf -- she always held onto the hope that Centurion would one day return his feelings. But he never did, even after his wife passed away.

And then Centurion died. Kar-Zol went into a decade-long period of seclusion and mourning, from which she only emerged in 2005. Soon after, Ultimaid arrived in Freedom City, and attempted to join the Freedom League. Unfortunately, Captain Thunder strongly disapproved of her use of a variation on Centurion's costume, even though she tried to explain that he'd tacitly given his permission years before. Upset, she continued to fight crime and hoped that the League would reverse the decision when they saw how effective she could be.

During the Grue Invasion, Ultimaid met and fought alongside the Patriot, impressing him enough that he invited her to join the Arsenal of Democracy when it passed from the Department of Defense to AEGIS in early 2006. She adopted a more "America"-themed costume in the process. Ever since, she has served as a trusted member of the Patriot's team, long after most of the original membership of that team has retired to find work for private military contractors.

Ultimaid was surprised when the daughter of the Centurion arrived on Earth and began calling herself Centuria, using the same costume she'd originally worn. There was more than a bit of envy mixed in with that surprise, for Centuria was more powerful than she was and seemed to be growing more powerful as time passed. The same could be said of Charlie Graham, whom Kar-Zol had introduced to her Ultima heritage. And yet Kar-Zol herself remained "plateaued" at her current level of power, just as she had for decades, and it didn't seem likely that she would grow even more powerful for decades or centuries to come. Still, she resolved to do what she could with what she had available to her, rather than getting angry or jealous over the matter.

But then, soon after Centuria joined the Freedom League, Superior sought the daughter of the Centurion out to make her a proposition. This was soundly refused, but Superior wasn't inclined to take no for an answer. The Arsenal was dispatched by AEGIS to assist the Freedom League in their fight against the rogue Ultiman.

Ultimaid's greatest fear had always been the possibility that she might have to face Superior in battle. She was present when Centurion banished him to the Zero Zone, and though she was the only one to weep for Kal-Zed's fate at the time, she knew that he would try to kill her. That wasn't the frightening aspect; what terrified her was the possibility that in order to stop him from killing her, she'd have to kill him. Could she do that -- kill her cousin, her first love?

When thinking of this, it had never even once occurred to her that when she confronted Superior, he would completely ignore her as irrelevant in the battle at hand, showing no signs of recognizing her at all.

Something snapped in Kar-Zol's heart and mind that day. She has become the spokesman for a faction among the Ultima, small but vocal, who argue that regardless of whether they should leave Earth behind or remain there, their responsibility to the world demands that they hunt down and execute Kal-Zed, regardless of the cost. It is not a popular viewpoint, which makes her rather angry. She has begun training fanatically, in order to gain enough power to be able to do it herself, if need be.

What will become of this love to hatred turned?

Damn. There's no good ending for Ultimaid there
Top

Nope. And it has the prospect of ending very badly for everyone in the Western Hemisphere.

At... least she's rockin' those guns? Charlie must be super-jealous.

Now, I am not, myself, a demon who makes horrible bargains with short-sighted and desperate people. But if I were, this would seem like exactly the sort of poor woman who needs a power-up. Unless the radical dudes of the Mr. Infamy Task Force get to her first.
Builds on the Sun
Top

Yes, I suppose he would be interested in her, wouldn't he?

"Heav’n has no rage like love to hatred turn’d
Nor Hell a fury, like a woman scorn’d."
— The Mourning Bride, act III by William Congreve

... wasn't there an adventure that opened up with those lines?
Top 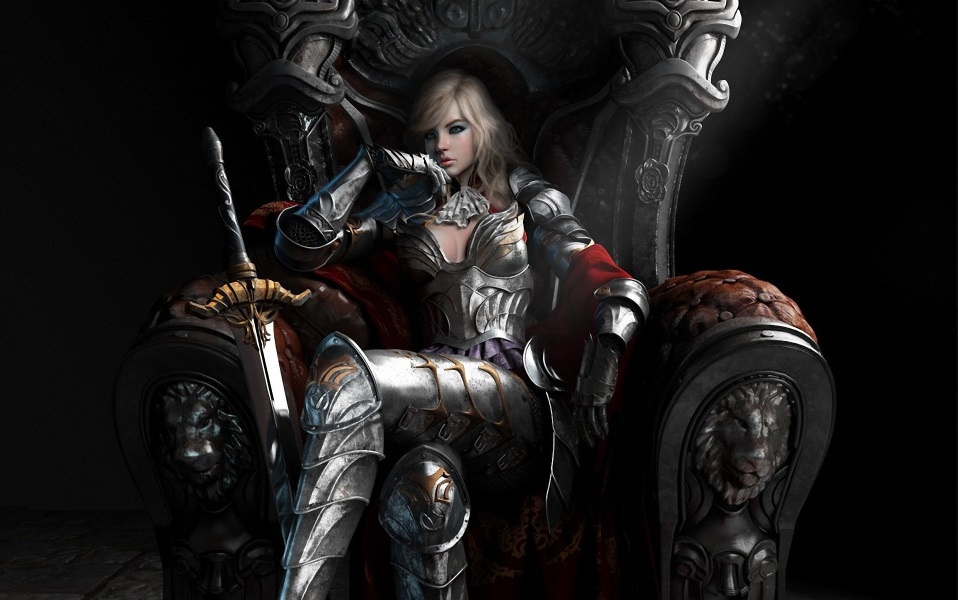 Among the mercenary army that founded the Empire of the Azure Throne were many exceptional soldiers, often possessing powers beyond those of ordinary men. Those who survived the foundation of the realm typically received lands and cities to call their own. One such lordling, gifted with might more befitting a giant than a man, founded the city of Emeraldias on the shores of Hammerfall Bay, and styled himself Prince. Her Royal Majesty is his direct descendant, and shows this in her own inhuman strength and stamina.

Princess Jessika ascended to the throne at a very early age, after her father fell in battle against the Eiskarls of Vimborge. Her mother having descended into howling madness at the news of her husband's death, the title of regent for the child princess was reluctantly granted to her uncle by marriage, Lord Maximus. He proceeded to rule the city passingly well, but worked primarily to enrich himself and certain of his cronies for the next decade.

Princess Jessika played the role of a naïve child for a number of years as she approached her majority, affecting to have no interest in the burdens of rule. All the while, however, she was covertly recruiting a quite startling variety of allies for the day when she asserted her authority. When that day finally came, two years ago, Maximus seemed to be utterly caught off guard. He chose to graciously yield to the Princess, and she took the throne of her fathers.

However, that proved to be only the beginning of her challenges. Upon stepping down as regent, Maximus promptly departed from Emeraldias, taking with him the majority of the city's army, who had been for many years paid out of his own pocket instead of the city treasury -- which was nearly empty. Maximus' cronies remained within the city, and have been doing their best to undermine Princess Jessika's rule ever since. So far, with the help of her allies and the aid she has purchased from the Last Men Standing, she has held on to her throne. How long that will last is an open question.

Where her counterpart is open and cheerful, Princess Jessika is closed and solemn. Her allies are allies, not friends. She is determined to rule well over Emeraldias and increase the happiness of its people. but there is not one single doubt in her mind that she is the monarch, and anyone who opposes her rule has committed a capital crime. She may choose to be merciful, but she is not obligated to be/ She is also profoundly lonely, but believes herself to be wed to the city.

Perhaps I should have specified, "monogamously wed to the city."