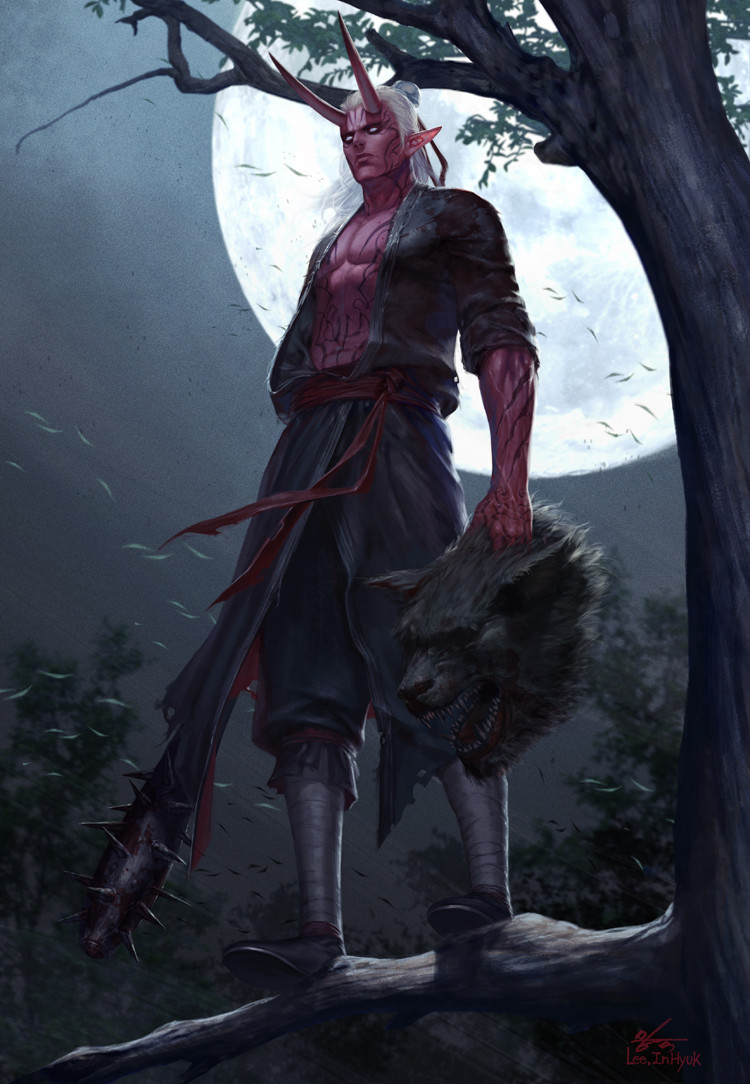 Complications:
Collateral Damage - Andy can be tremendously destructive. Fortunately, he knows it, and generally tries to avoid using his biggest blasts in populated areas.
I Am The Hype - Andy firmly believes that he is the greatest warrior in the universe, and he continues to believe so in the face of all evidence to the contrary. He will confidently trash-talk people moments away from handing him his ass, and being defeated will dampen his self-confidence for, at best, a short period of time before he convinces himself he was tricked or cheated somehow.
Funny-Looking - Andy has bright red skin, long white hair, and horns. He also likes to wear cowboy hats.
Not From Around Here - Andy was a stranger to the earth in his own universe, let alone other universes.

Ann Duerhaal is part of the elite warrior caste of an alien race that acts as cosmic security forces and police. His warrior caste is very competitive, and when the Cosmic Coil gave him the opportunity to face challenges from other universes, he jumped at the chance to win fame and glory for himself that his fellow fighters could only dream of. He has occasionally been to planet earth, or at least an earth, and he was shocked to find that on earth Ann is not considered a masculine name. He also learned, however, that the name Ann Duerhaal sounds a lot like a celebrity named "Andy Warhol," and after making sure that Andy Warhol was an important and famous person, he started using that as his name around humans.

Up to two hundred points. I added some skill points and gave his scanner some new abilities. I also gave him Interpose, since his ability to resist energy might make him better suited to taking the hits in some situations.
Builds on the Sun
Top "I spend half my life working out, I have Attractive 2, and damn it, people are going to notice."

I like the idea of a world whose Superman or Wonder Woman is a straightforward brick.
Builds on the Sun
Top

I apologize the last week or so has been a write off due to work, got called in on my day off when I hoped to flesh out my submissions background, still interested though.

However, if my schedule doesn't permit me to make the cut off before completing the character I totally understand, and respect your decision.
Top

Seeing as I have a meeting this evening and probably won't be back until the mid-morning, I'm not going to make my own deadline.

The United Coalition of Planets is the premiere presence in their universe uniting over 1000 planets across a multitude of star systems. It encourages peaceful dealings and communication across the stars. But the U.C.P. are no dummies. They know they must also be prepared for conflict. Toward that end they designed the Alpha Class starship for both exploration and confrontation, their flagship of which is the U.C.P. Praxis, commanded by Captain Jonathan Trent, a middle age Earthling with a distinguished record in both tactics and diplomacy. They gave him the best crew of science officers, medical staff, and engineers to keep the ship running smooth. Its zero-point drives would run near forever producing all the energy it would need and the onboard replicators can keep them in whatever physical matter required be it parts or food and sundries for the crew. They would be prepared for anything. So when they were sucked into a wormhole created by a collapsing star (they were shielding a nearby inhabited planet from the effects its deadly supernova), and they emerged into a completely different Universe, they were momentarily taken aback by the fact that, apparently, their Universe was built on a mere fraction of the scale as this one. Buildings here were planet-sized and people were formidable even without, apparently, some of them possessing strange powers. The Praxis started by gathering allies in this new Universe, one of which is an interplanetary corporation known as Cosmic Coil. They promised to help with whatever multi-dimensional research they could and otherwise keep on the lookout for ways the Praxis could use to get back to their home dimension.

The U.C.P. Praxis looks to be a foot-long toy model. Anyone looking closely will see the intricate details and maybe even several minuscule beings looking back at you from portholes. It was determined that the crew cannot venture outside of the Praxis due to the size difference and their bodies not able to process the size of this verse's Oxygen molecules so they act as one unit under Cpt. Trent. It is usually his voice or even a holo-projection of him that the Praxis emits during briefings (though occasionally it'll be a technician or counselor if their experience is needed).

Complications:
Motivation/ Sworn duty - Peace and Protection, Captain Trent still maintains the code of the United Coalition of Planets - Protect the innocent life, establish and maintain peace.
Homesick - The Praxis is looking for a way home.
Explorer vessel - The Praxis is likewise here to gain information on Strange new life, and new civilizations; to boldly go where no one has gone before. They should have been careful what they wished for.

*{unlike inventor, the use of this doesn't create items but instead let's the ship do a wide range of things more akin to Spells than anything else. Sufficiently advanced technology being indistinguishable from magic, and all that.}

Self-contained life Support; immunity Fortitide [30pp]
{The Sealed Hull of the Praxis keeps the ship operating at peak efficiency, stops external contaminants, crew shifts mean the Ship doesn't really 'sleep', it even grounds out any magical or power instance of biological attack (it may spread throughout the crew but the onboard doctors treat it too quick to register, and while the crew is subject to aging even that may not matter as children are born and trained, etc.}

AI/Crew back-up; immunity Mental (half) [5pp]
{A mental Affliction or attack directed at the Praxis would be spread over the crew of 1000's of individual miniscule minds. It's a much reduced impact that way.}

That is the single most unique "superhero" I've ever seen. Color me intrigued.
Am I dead? Am I alive? The answer may surprise you!
------------
I'm the GM of The New Mythos, and play more characters then I probably should.
Top

Crazy, right?! The idea wouldn't let me go until I built it.
"Something pithy this way comes."
Top

I built a sentient alien sword as a hero before.
Top

I want to fit this in the game. We'll see!
Top

Quote the intesting line up of potential cast. Pretty diverse too.

Reena Bunyan: Ax of the land

Forgive my absence today, there were unavoidable problems out in the real world.

Right now the list looks as such
If all simmers down within the next few hours, I'll get back to posting. Without going into my personal life, I don't think that's going to happen. Monday, Tuesday at the latest. Thank you for your patience.
Top

Looks like an interesting roster. We got heroes, antiheroes, a toy-sized battleship. xD
Top

Turns out I forgot that no stamina counted as -5 for point calculation. I'll see about updating U.C.P. Praxis when I can.
"Something pithy this way comes."
Top

No big rush, Miracle! You take your time. I'm happy for the chance to experience multi-dimensional hijinks!

Edit: I've been thinking about what you've said way back for awhile, and I've decided you're right about him lacking some int. Because I feel it fits his attitude, I've added the 3 ranks in presence to Intellect, making it 5. Not a super genius, but he's smarter then the average man.
Am I dead? Am I alive? The answer may surprise you!
------------
I'm the GM of The New Mythos, and play more characters then I probably should.
Top
Post Reply
87 posts