For all of your Play-By-Post games.
Post Reply
178 posts

What did you roll again?
Top

I had asked Neo if my perception before combat started propped picked up on the elf. If so, Ryou would relay where.

May be easier now that Legolamb has taken a shot...

In that case, we can assume that Mergebane pointed out where the shooter was (on the rooftop).
Top

Nice. Pathfinder, Helena has a healing power, would you rather her heal Anna or take out the sniper?
Kirinke's Compendium of Wondrous Creatures
Kirinke's Conversions (D&D Items to M&M3E Rules)
Top 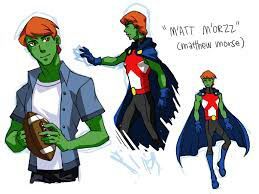 Complications
Responsibility - Adopted sister: Gertrude Logan (Beast Girl) - A supposed rule 63 version of Beast Boy, in fact another Grue,
Enemy - Aunt: J'Ann J'Onzz - no evidence she crossed over, but M'Att is on the lookout. J'Ann was not the Martian Manhunter on M'att's world. She is a Meta-Grue with a slightly different origin than the Prime Meta Grue, but no less the megalomaniac. (M'Att refers to her as his Aunt to complete the Kid Martian persona.)
Secret - White Martian (Actually... Grue)
Involuntary Transformation - Like the Founders, the Grue from M'Att's world need to return to their natural state at least once per 24-36 hour period. This state is a liquid form not unlike mercury in consistency and appearance.
Involuntary Transformation - When M'Att is in physical contact with another Grue, regardless of universe of origin - the point of contact will revert to a semi-solid version of their natural form, M'Att actually fears this and as a result has a slight phobia of Shapeshifters until he is sure that they are not Grue.
Hunted - Most incarnations of the Grue do not like independent elements. In M'Att's case, this means they want him dead. Luckily for him, his guise as Kid Martian is serving him well. Not to mention that there has not been an established presence of Grue as yet in the Merged universe.

Design Notes
* Originally, I had Shifter (A Jayna/ Wonder Twins Pastiche) in mind for this one. Then a White Martian. Then the Grue. Finally went with someone who can be all of that.
* The base build for this is a point for point copy/ paste of the Grue Infiltrator from the Cosmic Handbook. I then tweaked it for House Rules and PL.
* So, Kid Martian is not a rule 63 Miss Martian. He's something worse. However, his secret is not as secret as he thinks and he has been admitted to the school to try and double-spy/ double-cross his superior's motives. (I eventually want him to turn on the collective. Maybe have him meet Changeling from the Alterniteens at one point.)
* There are 67 extra points "spent" on the character sheet - it's essentially a set up of powers from Miss Martian (From DCA HV Volume 2 and the Young Justice cartoon) in case the Variable is too much. Having only 35 PP available at any given time to copy powers, he can't actually emulate all of those at once of course, but visually I found it easier.
* Although listed as Power Mimicry, the Variable actually doesn't have a flaw on it, and I think it should stay that way. He would be able to mimic powers he knows about - powers that he's seen or experienced. Probably tends to take on something of the appearance of that person when he does, but I haven't decided on that yet.
* I have a Benefit of Established Identity - his real name is "Mazzaryd Mizzruin."
* Its worth noting that I am aware this character has not only the potential, but actual listed powers, that step on the niche of others in the group. That's kind of the point of the character from an IC perspective. From an OOC perspective, that's not how I play or intend to play. Kid Martian is meant to be the character that is worthy of the group's trust, but has a long way to go to earn it.
* My idea for the character is to be currently in transition from a personality like Changeling from the Alterniteens to something more like Season 1 Miss Martian with the intention of developing much like she did - with the willingness to mindscrew people to get what he wants, not totally understanding the consequences.

The Grue that most familiar with the species recognize are are militaristic and tied into the collective of the Meta-Mind. However, like Changeling’s people, Kid Martian's people prized individual growth and thought. Each Grue was encouraged to evolve in its own fashion and add back something new to the race. Kid Martian’s people were among the most advanced, enlightened, and xenophilic (rather than xenophobic) species of their dimension.

When a version of Elite and the others from another variant of the Alternitees arrived in Kid Martian's universe, they panicked at the sight of the Grue and fought to escape. They were captured and brought before the Majestry Collective. The AlterniTeens realized their error and explained how the Grue of the different realities were more warlike. The Majesty was horrified at the thought that in other realities, the Grue were villains. They asked permission to send an observer with the AlterniTeens. Kid Martian was chosen because he was young and capable of imprinting easily. He would evolve according to his experiences and eventually bring that knowledge and his evolution back to his people.

The AlterniTeens agreed, uncertain if they could trust even this reality’s version of the Grue. Since then, Kid Martian's unadulterated enthusiasm, innocence, and love for life have taught the AlterniTeens the truth. He always sees the better in others, and she is totally obtuse when it comes to detecting sarcasm. While he understands there’s evil out in the omniverse, he rarely matches evil with the villain standing before her. Still, his experiences have taught him much, and while he dislikes hurting people, his shape-shifting abilities make him a formidable opponent. (By the time he becomes a PC though, this enthusiasm and bubbly personality has subsided substantially and he is very much like his adopted identity's inspiration during season 1 of Young Justice.)

Having been warned about how others perceive his people in other dimensions, Kid Martian adopted a very human—and very perky—appearance. Since the Merge, that appearance has changed to became a male version of Miss Martian, complete with the name Kid Martian and the assumed identity of Matthew Morse/ M'Att M'Orzz. As noted above, thankfully, he is somewhat less perky these days.
Last edited by Bladewind on Sun Feb 16, 2020 4:09 am, edited 2 times in total.

Anna has Regeneration- and if Helena did TRY to heal her, it would probably require an attack roll, as she would not cooperate.

"Hah, I knew it all along! Look everyone, she's trying to attack me with her light powers!" -Anna probably.
Am I dead? Am I alive? The answer may surprise you!
------------
I'm the GM of The New Mythos, and play more characters then I probably should.
Top

Ah. Okay then. I just wanted to make sure before I posted anything. Taking out the sniper is a go. ^_^
Kirinke's Compendium of Wondrous Creatures
Kirinke's Conversions (D&D Items to M&M3E Rules)
Top

Neo, Does CJ have an idea where said elf is? She might know from the other two people she did successful mind read.

EDIT: This is what I get for posting before reading the whole thread.
Top

So many dice, so many dice... Tried to go in with a big opening attack. Marginal success.
Am I dead? Am I alive? The answer may surprise you!
------------
I'm the GM of The New Mythos, and play more characters then I probably should.
Top

Curious how CJ is targeted by a perception range attack when she is invisible to many senses. Is there a visual effect explains her being targeted?
Top

IIEP...sorry, I should have asked beforehand...is CJ wearing metal of any kind on her? If not, then you do not have to roll.
Top

She might wear a necklace. I've never really thought about it. But no, she generally has no metal. Certainly not ferrous metal.
Top
Post Reply
178 posts