Where in all of your character write ups will go.
Post Reply
1417 posts

If you wanna check out more stuff, here's the thread that was a predecessor to this one, featuring a group of us discussing Rifts Conversions: viewtopic.php?f=12&t=830
Top 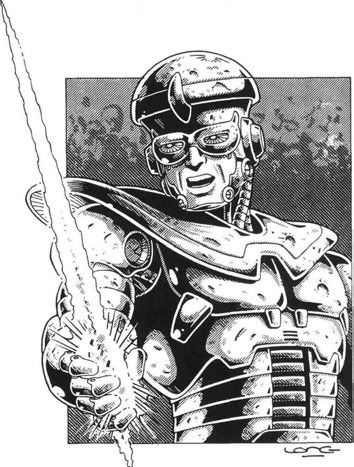 Somehow less cool than I remember . . .

Complications
Responsibility (Code of Chivlary)
The Cyber-Knights follow a code of conduct chock full of compassion and heroism.

I'd always liked the Cyber-Knight concept since I first saw it back before the turn of the century, but the new take in the Ultimate Edition caught me by surprise. Apparently they added a whole "anti-tech fighter" theme as part of the Coalition Wars series chronicling the war with Tolkeen, which published after I'd moved on to different things. It makes sense I guess, as an opposing niche to "mage-hunter" classes like the Psi-Stalker, although now I'm interested in making a Psi-Stalker that is also a Cyber-Knight (according to the books, 3% of CKs are Psi-Stalkers).

I built to a level 8* just so I could showcase some of the Zen Combat that uses that anti-tech theme. "Combat Awareness" essentially allows the CK to sense all the tech about to attack him and can act before it, with a bunch of bonuses for the CK and a bunch of penalties for the hapless tech-wielders. I broke it down to a Danger Sense run by a very particular Tech Sense to allow acting in any surprise round (w/Seize Initiative just in case you need to absolutely act first), some specialized Perception bonus to help that happen, and a Favored Foe vs Tech-types.

The Psi-Sword is of course central to the build's concept, and I'm pretty pleased you can make paired swords eventually (easily built with Split) and can even customize to make the weapons different types. What surprised me was the near-full page of double-column text going into how to make the swords different shapes and colours, the rules for how many actions you need to use to change them, and the strangely difficult and arbitrary rules for trying to make a pure white sword that is so difficult to maintain it actually uses up an action every round and give a -10% penalty on all skills, with no explanation as to why one would go to the trouble. I can only assume it's a stunt move for initiates, similar to fighting with your off-hand, that would only impress those who already know how hard it is to do.

The build's still a little soft since it needs to have the Psi-Shield active and the Heavy Armor on to hit defensive caps, but I like it as a base. I figure a Level 1 CK should be able to fit into a PL 8 or 9 standard budget (unless you also get more psionics, which I specifically avoided but about 70% of CKs have some additional psi) and grow pretty well . And I'm particularly pleased with the robot horse as a vehicle.

*Actually I made it 7th level, but realized that I was so blinded by the florid writing of the grocery list of tech that are affected by "Level 4: Basic Combat Awareness" I didn't realize it only affected a single opponent until after I built the power. So it's 8 now.
Last edited by JDRook on Wed Mar 27, 2019 10:51 am, edited 1 time in total.
Top

The Cyber-Knights book did a lot to update the class and make it more in line with the power creep of the setting, and it actually pointed out that having a tech basis for a lot of their powers made sense, since they were C-Y-ber Knights and not P-S-I-ber Knights, which implies a connection to cybernetics and machines. Hence the cybernetic body armor and the ability to screw with machines. So they've got the psychic powers to deal with magic and metaphysics and cyber-path powers to deal with machines. Makes them generally well rounded as far as dealing with threats.

It did kind of suck that the Mind Melter got a better Psi-Sword than the Cyber-Knight. I mean, if the entire point of the class is an at-will Psi-Sword, you'd think they'd have the best one.

And yeah, it did take them a while to get some decent art. 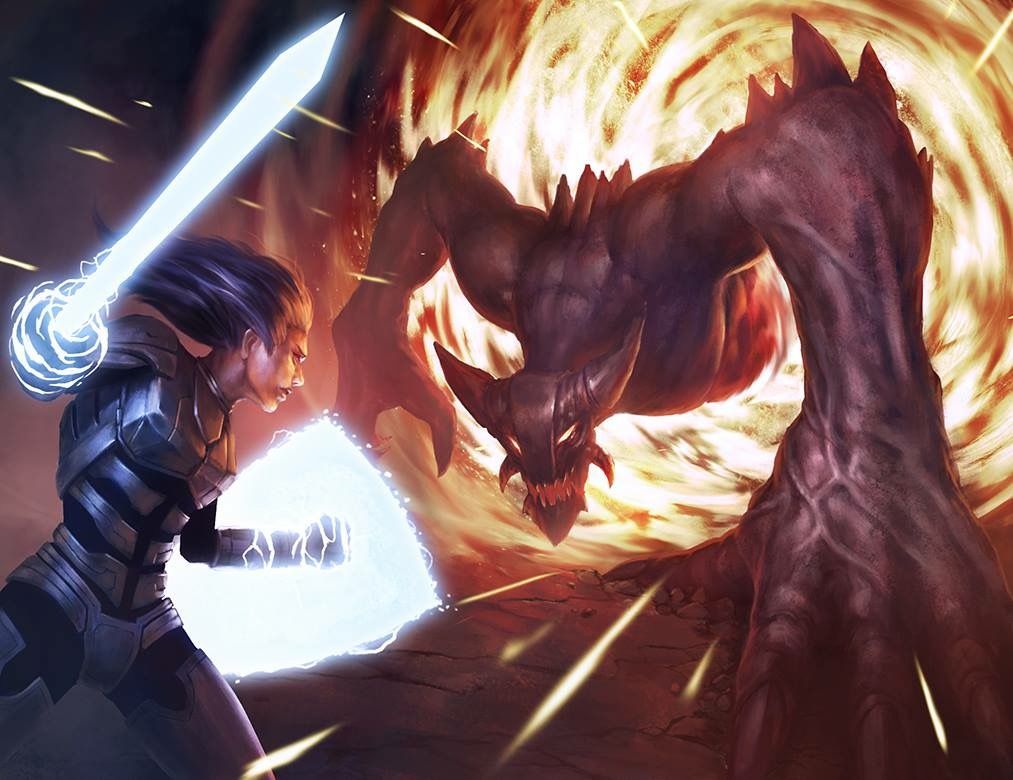 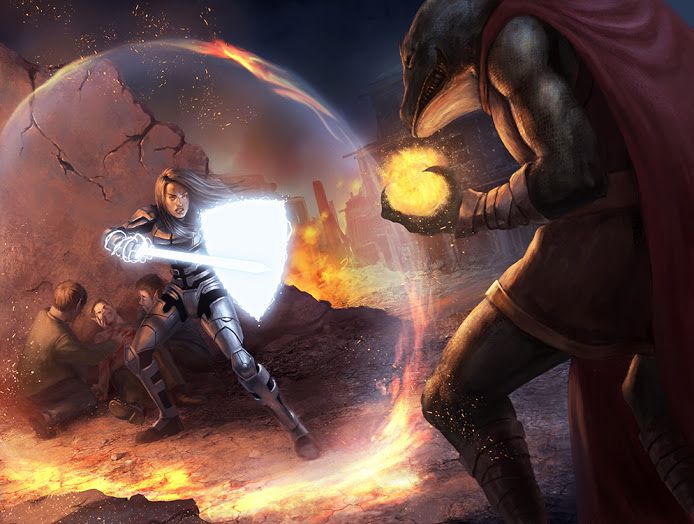 Though again, a psychic, cybernetic paladin going around on his cyber-horse fighting monsters and madmen is another example of how fun Rifts is.
Top


Ares wrote: ↑
Mon Mar 25, 2019 5:12 am
It did kind of suck that the Mind Melter got a better Psi-Sword than the Cyber-Knight. I mean, if the entire point of the class is an at-will Psi-Sword, you'd think they'd have the best one.

They probably wanted Mind-Melters to be the most dangerous/toughest ones overall. I mean, that's a really powerful class. But with pretty weak armor and stuff by comparison.


And yeah, it did take them a while to get some decent art.

The early art for Cyber-Knights is SOOOOOOOOOOOOOOO bad- just weak-ass Kevin Long stuff. And then many of the other pics are just "guy in medieval armor" which isn't really outstanding in the world of 9,000 rocket launchers being attached to guys.

I'd say I prefer the Cosmo-Knights over the Cyber-Knights, though the latter and Glitterboys are both fairly high up there. Some of the Power Armor options like the SAMAS and Sidekick make a pilot pretty appealing, and of course, some of the martial arts options are pretty cool.
Top

Regarding the “White Blade” thing, I think “Being worse for no reason in particular” is as emblematic of Rifts as anything

Though it’s still funny how the Sword is only as powerful as basically your average PC’s gun, especially since it’s objectively worse in every way (being a melee weapon while guns can hit from a thousand feet away).
Top

Jabroniville wrote: ↑
Tue Mar 26, 2019 12:41 am
Regarding the “White Blade” thing, I think “Being worse for no reason in particular” is as emblematic of Rifts as anything

I'm just curious what might have sparked it. Did some big design discussion (that may or may not have taken place entirely in KS's head) come up about how the ability to change the colour of your sword could somehow be problematic? And if not, should it be made so? Was a "pure white" sword going to be a prestige item like "true black" dye in Ultima Online? And just so many column inches dedicated to that . . .


Though it’s still funny how the Sword is only as powerful as basically your average PC’s gun, especially since it’s objectively worse in every way (being a melee weapon while guns can hit from a thousand feet away).

I guess there's also the consideration of being able to parry a Mega-Damage attack, since "Parry" and "Dodge" seem to be more literal in Palladium than just stand-in names for Close and Ranged Defense like in M&M. So in theory, a CK could be in casual wear but if they are ambushed by MD marauders & monsters they can still pull an MD weapon out of nowhere to block their attacks. (Of course, they also have that "living armor" which should almost be as good for that.)

Speaking of which, they also specifically note that the Psi-Shield can't be used to block ranged attacks, which I attempted to honour in my build, but the more I think on it, the more I believe that is best ignored.
Top

The blade thing really is mystifying. Knowing how Palladium works, I'd almost think it likely that someone figured that a White Blade would be more damaging to Vampires or something, but they may have changed their minds without altering the original text (remember, they used printing presses), forgotten about it, or anything else.

And yeah, the Psi-Shield being only useful in melee is very odd. One of those inexplicable decisions made. You could tell someone thought highly of the Cyber-Knights (they get a big pic in the fancy collections, and they get a WHOLE BOOK based around them later on), but at the same point, they have enough drawbacks and "Like _____, but slightly worse" to them that it's clear the Glitter Boys, Crazies and Juicers are supposed to be much bigger deals in the game.

And as I've detailed with the Crazies... that one never "took".
Top -Cibolan minions, the Pincer Warriors are said to be "near-mindless" but only have slight modifications to their mental stats. For the most part, they are incredibly tough, dangerous Mooks that would take a party quite some time to destroy- averaging to about 180 MDC each.
Top

-Not given a picture in the book

Try World Book 1: Vampire Kingdoms. I believe that there is one that is a member of Reid's Rangers? If not it's more fleshed out in the back with an un-armored pic of one, IIRC.

I'm not sure if he could have included more drool and slobber around the double rows of teeth.
Top

I love how half the alien races in the ultimate "kitchen sink" setting in RPGs look as stupid as this thing does.

-I never really got the Rifts books dramatically emphasizing "Optional Player R.C.C." as if that meant anything in a game where you could PLAY ANYTHING. I mean, isn't EVERYTHING an Optional Player R.C.C.? Only a tiny handful of races ever got this notification, and it appears to basically be "Well, you probably SHOULDN'T play this, but if you REALLY want to...".

-These ridiculous-looking things nobody would ever play hail from the Palladium world of Palladium Fantasy RPG. They are sentient, but still stupid, horned gorillas who use tools and high-tech weapons on Rifts Earth. Inix fooled them into thinking he was a god, and convinced them to join his armies. They are easily-forgotten cannon fodder, looked down upon by Pincer Warriors, but the Pogtalians admire them. They are very lightly armored (a mere 35 MDC! Barely better than, like, a 20th Century Tank!), but sport high-poweroed Cibolan weapons like a Plasma Rifle that does as much damage as a fricking' SAMAS trooper's RAIL GUN!
Top

Kevin Long: GREAT at Power Armor; Not So Great With Ripped Dudes.

-The "Kitchen Sink" setting of Rifts makes frequent use of Fantasy creatures, and South America gives us the Jungle Elves, featuring some trademark awkward, badly-drawn Kevin Long art of a shirtless pointy-eared man in a loincloth. They live on Maga Island, at the northern tip of the continent, and are exiled beings from a forest world overrun by the Splugorth around the Coming of the Rifts. Now they're tree-worshipping hippies (literally being ruled by a council of wise, telepathic trees), and living in harmony with the humans and D-Bees on the Island, who have adopted their ways. Most are expected to be either Biomancers or Wilderness Scouts.

-Jungle Elves are a weak R.C.C. until you get into their Biomancy stuff, as even the non-Magical ones have a handful of powers (one per level after the second), and Biomancy Weapons.
Last edited by Jabroniville on Fri Mar 29, 2019 12:22 am, edited 1 time in total.
Top

Why not just give them Animal Empathy so they can Persuade animals without penalty? AnEm is basically designed for use by tree-hugging naturist characters like this.
Top
Post Reply
1417 posts